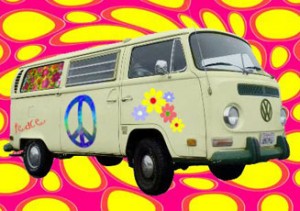 Funny thing time, it surrounds us in every single aspect of out lives, if your like me then im contstanly thinking where has the day gone.

One moment its New Years Eve the next its Xmas day again. Its strange as ive gone through some old blog posts, from the old blog where else, and i noticed i wrote about time in a few posts on there as well so its obviously something which has bothered me for years.

Well seen as this is a horse racing blog we need to press on, time is of the essence

Todays post is still horse rating related don’t worry ive not gone all hippy on you although that would fit right in with the era. A couple years ago i gave up my city penthouse lifestyle, sounds rather posher than the reality, it wasn’t anywhere near what i call a real penthouse like the lofty types you see in New York, but it was great.  At first i took the place on as my new office but then decided that seen as i spent so much time there why not just move right in. Desk in one room bed in the other, saved the commute.

So after working from early morning till late at night and eating out most nights depending on who had a special pie and a pint night or curry and a pint night i finally out grew the place, not to mention my trousers. I decided why pay all this rent when i could have a house, with more rooms. So after years of city living i decided to move into the suburbs. Two years later im still getting used to the idea. 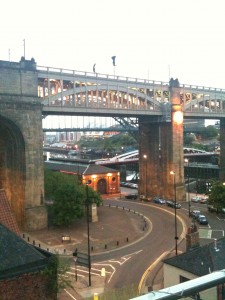 Do i miss the city hustle and bustle, of course i do, did i get a far better deal for my money, certainly. Same with racing and value, always try and get the very best price you can, i know most of you use Betfair and to be fair its difficult to beat on price and easy of use, but it can pay to have multiple bookmakers accounts at your disposal, even if you just use this account for any potential value bets.

I like nothing more than a good project wether its working on new racing software, making some videos, or coming up with some new racing features. When i first viewed my potential new pad i knew it needed a lot of work, having been brought up in the family business renovating houses i though nice bit of DIY to keep me busy during the weekends when im not looking at races., that was over two years ago… Two years later its almost finished..

It was during renovation or to give it the technical term, ripping things to pieces, that under floor board in what was going to be our bedroom and wet room that amongst the empty red Embassy cigarette packets (these things are under every floorboard ive ever lifted, usually a bad sign as these things are the cowboys choice of  smokes ) as well as some cellophane Scots egg wrappers that i found some old newspaper.

So today i thought i would share my findings with you, “so heres the cigarette packet” …. seriously though i couldn’t believe it was the racing section from the 1976 Derby, it was a great find. Ok not as great as a gold bar or a stash of Rolex watches but never the less. I read it and decided to keep it.

One of the articles is an interview with the late great Eric Morecambe from Eric & Ernie, there is also a chap with a name of one of todays greatest flat jockeys, and a full derby write up, on that day Lester Piggott rode the winner and you can see a very young looking picture of him on one of the pages as well. For me though this was at the time a down tools grab a cuppa moment.

The paper itself is a year younger than myself, i would have thought it some kind of even spookier sign if it was from the Derby the year i was born but still from all the houses i could have bought it just happened to be under the floorboards in my bedroom, very strange.

Hope you enjoy these pictures, i especially like the Sauna pants, brilliant. 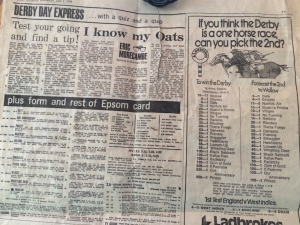 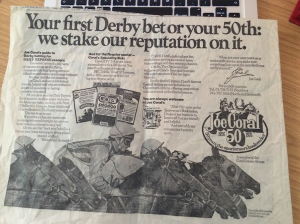 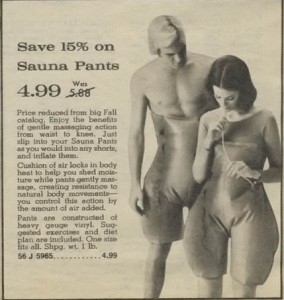 How did these never catch on..! 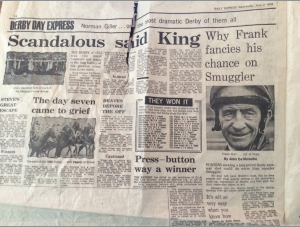 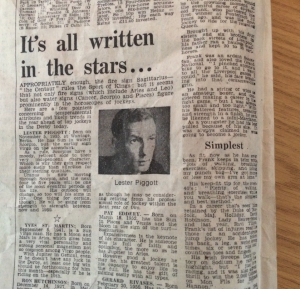 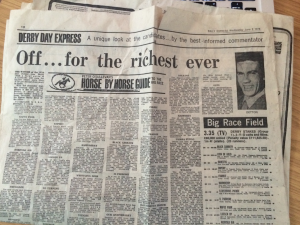 Hi John, glad you liked the post. Most people prefer the Flat Racing, lets hope the weather gets better. BSG 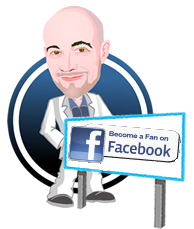 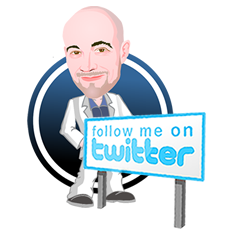